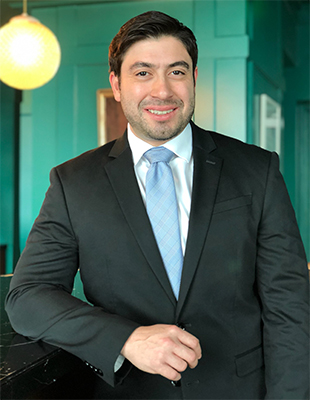 Anderson Franco is a trial attorney who has successfully represented clients throughout California in landlord-tenant, real property, and personal injury matters.

Anderson Franco has focused his career to representing clients in landlord-tenant disputes, personal injury matters, and real property claims. He has served as the trial attorney in jury and bench trials. He has successfully argued motions before various California courts, including motions for summary judgment and discovery motions. Mr. Franco has litigated matters with 60+ parties, cases designated complex by the court, and multiple million-dollar cases ($1,000,000+).

Mr. Franco has also contributed to developing landlord-tenant law through the California Court of Appeals. The Court published a decision in his client’s favor that expanded on the San Francisco Rent Ordinance and eviction requirements: Reynolds v. Lau (2019) 39 Cal.App.5th 953.

Mr. Franco was selected by Super Lawyers Magazine as a Rising Star in the area of Civil Litigation. The attorneys selected as Rising Stars are limited to 2.5% of the outstanding emerging lawyers in Northern California who are age 40 and under or having practiced 10 years or less.

Mr. Franco has a wealth of experience representing Plaintiffs and Defendants in cases concerning:

Mr. Franco then obtained his law degree from University of California, Berkeley, School of Law (Boalt Hall). In law school, Mr. Franco was the Editor-in-Chief of the Berkeley Business Law Journal and an editor for the Berkeley La Raza Law Journal.

Mr. Franco is a native Spanish speaker and a native San Franciscan.